Griselda García, Hallucinations in the alfalfa & other poems 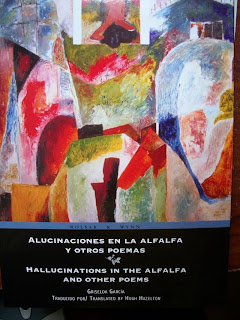 The poetry of Griselda García is a hallucinatory journey through a landscape haunted by startling images of sensuality and desolation, humour and conflict, passion and suffering. Her lyrical, shifting visions, interwoven by a subtle, intermittent narrative line, touch on fear, love, death and redemption. Though intensely intimate, her work also echoes the trauma of recent Argentine history: it is “a journey in an unknown car, with an unknown person, toward an unknown place,” as the critic Jorge Santiago Perednik has put it. García follows her own poetic path, writing in search of a reader who can understand the resonance behind her words, someone who will feel “an almost animal joy,” she says, in being deeply moved by a poem. Her style is spontaneous, filled with unexpected contrasts, and yet carefully polished. It is a poetry that is essentially urban, cutting-edge and utterly of the present: for Canadian readers, it reflects a reality that is both new and akin to their own. This translation by Hugh Hazelton is the first of García's into English.